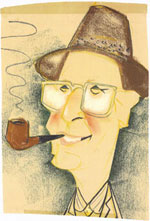 Smoky Joe's started as a pushcart on Chicago's Maxwell Street, a haven for thousands of immigrants looking for a better life in America. The founder was Joseph Bublick, an immigrant from Russia. Together, Joe and his wife Esther, both tailors, cut and sewed sheepskin vests which they sold to Chicagoans in the cold winter. They prospered so well that they decided to establish a full retail store and Smoky Joe's came to life. The name originated because Joe was dark skinned people referred to him as Smoky. The name carried on as his son, Morrie enjoyed smoking pipes and cigars.

Their little business started to grow and in the afternoons their son, Morris (Morrie), worked as a salesman while attending law school at the University of Chicago. He had a love for the clothing business, designing his own outfits that customers so admired they would ask to buy them right off his back, even if the size was wrong. Morrie decided to forgo law school after recognizing his passion for the business. His younger brother, Max, managed the economics of the business, while Joe operated the register and provided sage advice to customers.  When sister Rosalyn married her husband Dave, his addition to the business completed the perfect family team.  As the stores grew in number (3) so did the family. Coincidentally, Max, Morrie and Roz had ten daughters who at one time or another all worked in the stores. 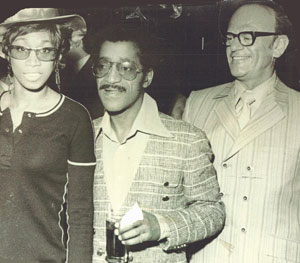 The business grew as a style center throughout Chicago, especially among the young adult crowd looking for something different. Morrie originated The Zoot Suit, Mr. B. collars, Italian knit shirts faced in butter leather and even reverse pleated slacks. Entertainers whose names are now famous shopped at Smoky Joe's. Baby Huey and the Babysitters, Smokey Robinson, James Brown and Sammy Davis Jr., were frequent customers. The Jackson Five, who grew up in nearby, Gary, Indiana purchased their suits at Smoky Joe's. From time to time they sang and danced in the lobby too.

Over the years Smoky Joe's became well known throughout the fashion industry in North America and around the world. Designers often made appointments with Morrie to get his vision on where their crazy industry would go next. Window displays which were quite animated for their time, attracted crowds from all over Chicago.

Without doubt, Smoky Joe's is the story of America at its best -- innovation, hard work and fearless enterprise.

Beth Omans, wife of Steve Omans, (Morrie's first grandson and pride and joy) had heard so many amazing stories that she became intrigued about the history of Smoky Joe’s. Having worked in the retail industry for over 20 years, Beth decided to pursue her dream to design unique clothing. Her first collection will bring back the smoking jacket for men, women and dogs. The tuxedo style jackets are a fun piece which can be worn with jeans or dress pants for a night out on the town or to a black tie event. Collaborating with other independent designers and fashion houses, Beth has brought back the original style creators, Smoky Joe’s Clothing. Inspired by fashion from an era where clothing was designed using the finest materials and craftsmanship, Smoky Joe’s Clothing continues to be a story of America at its best -- innovation, hard work and fearless enterprise.