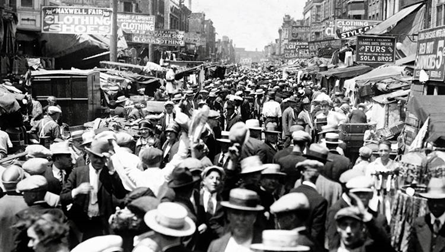 “In the shadow of the Loop's skyscrapers, there once was an open-air bazaar with sights, sounds and smells that seemed magically transported across time and space from some Old World village. The Maxwell Street market — its principal thoroughfare was just south of Roosevelt Road on either side of Halsted Street — was the ancestor of today's suburban flea markets (Chicago Tribune, Chicago’s Love Affair with Maxwell Street.) ” Maxwell St. has a rich history of being a leading flea market in the area that involved various different cultures, which made this street such a riot in it’s time period. The street was a haven for thousands of immigrants looking for a better life in America. “Besides food, gossip and entertainment, a Trib(une) reporter advised prospective buyers in 1968 that they could find "caps and fedoras, men's suits that…would last forever….(Chicago Tribune, Chicago’s Love Affair with Maxwell Street.)” Maxwell St. has a legacy similar to that of Smoky Joe’s, who’s business started out on a pushcart on Maxwell Street. The founder was Joseph Bublick, an immigrant from Russia. Together, Joe and his wife Esther, both tailors, cut and sewed sheepskin vests which they sold to Chicagoans in the cold winter. They prospered so well that they decided to establish a full retail store and Smoky Joe's came to life. Today, Smoky Joe’s is an e-commerce business dedicated to supplying customers with smoking jackets for men, women and dogs